This is why we should WAIT before making any sweeping changes to a publishing plan. After a minor panic attack about not being able to follow through with Victorian Villains Saga via the serial format (due to a shoulder injury) --- NEWS FLASH --- the shoulder healed and Catherine Lloyd wanted to keep going with the "Penny Dreadful" style of release:

"The tone of gothic romance is suited to the cliffhanger narrative. I like the novella format to compact a tight, breathless romance with suspense. The shoulder is feeling better and publishing a novella every 2 or 3 weeks suits my lifestyle at the moment with children coming and going. So, I am back at it!"

Kicking off the third trilogy in Catherine Lloyd's Victorian Villains Saga is LOVE TORN ~ The Master of Cliff House Trilogy ~ Available for purchase on Amazon and in Kindle Unlimited. 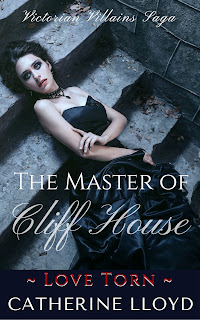 “What is bred in the bone will come out in the flesh...”

Jenny Raine, the bookish 19-year-old widow of Sir Richard Raine, is shattered to learn that a distant cousin, Jackson Zephyr, has inherited Cliff House. Jenny was engaged as Sir Richard’s secretary before their marriage and will be homeless if she is evicted from the estate. But the handsome new master is unmoved by her plight. Zephyr is a career thief who has his eye on one prize: stolen gold from a long-ago heist that was hidden on the property. When his predecessor’s beautiful, strange widow thwarts his plans, Jackson applies pressure to break Jenny’s will and she is forced to reveal a shameful secret. The knowledge gives him power over the young woman until a sinister threat arises that pushes them into a passionate alliance.

Love Torn is the first novella in The Master of Cliff House Trilogy, launching the third installment of Catherine Lloyd’s Victorian Villains Saga. Four villainous fathers drowned at sea curse their four sons with greed, murder, lust and pride. Set in 1867 England, this steamy, suspenseful saga is written in the classic gothic romance tradition of Victoria Holt and Phyllis A. Whitney. The novellas will be released in installments like the “penny dreadful” of the Age. Each episode ends in a cliff-hanger. Love Torn contains scenes, language and themes written for a mature audience.

Posted by Writewood Creations at 04:31 No comments:

Why do we love romance novels?

It's a regular question that comes up in the book industry and it really, really bugs us. Why does no one ask why Penthouse is popular? Or where did Hustler find its market? Or what's up with all those military thrillers?

What is the big deal if millions and millions of women love to read romance novels? And we're just as bad, enabling the unspoken criticism by making excuses to justify our reading habits. "I don't want to think after a hard day." "I just like a good story." "I have enough worries, I want to live a fantasy for awhile."

You know what? This is the only answer anyone needs to hear: WE LIKE IT. We read it because we like it. As a literary genre, it is a way of understanding our world, our relationships and ourselves. Romance can be a safe place to delve into some dark issues and see there is light at the end of the tunnel. Falling in love is fun and terrible. It is endlessly fascinating as a theme. Oh, and we like happy endings! We could go on and on but the short answer is: WE LIKE IT. Now let's put a fork in that query and get back to reading what we love.

Glory, August is HOT! Bundled Releases in Victorian Villains Saga coming at you just in time for the dog days of summer. 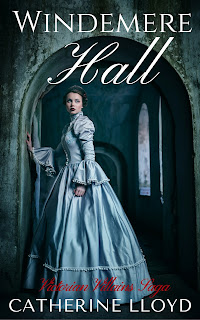 Shy, stammering Clara Hamilton is shocked when her father announces her betrothal to a cousin she barely knows. Her uncle’s stepson, Branson Hamilton is handsome, avaricious and rumoured to be unstable. Nineteen-year-old Clara, anxious for her father’s approval, agrees to the union unaware of what is at stake. A sinister family secret surfaces and Clara soon discovers that master of Windemere Hall has a dark revenge in store when she enters into his power.

Available in Kindle Unlimited and in Print 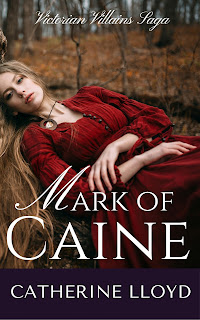 Laura Mayhew is the only witness to a sex scandal at Windsor Castle and is committed to Gateshead Insane Asylum to discredit her story. Tanner Caine, a cold, solitary and emotionally damaged ex-naval officer is tasked with silencing the girl permanently. Laura has the gift of second sight and she has been expecting an assassin for months but Tanner insists he’s only there to help. Haunted in her dreams by a baby’s cries, Laura decides to trust the dangerous Mr. Caine to escape the asylum and find the missing royal infant. When she is compelled into marriage to obtain her release, Laura discovers Tanner Caine is the one man whose thoughts she cannot read. And it is possible she has married her assassin.


Mark of Caine is the second novel in Catherine Lloyd’s Victorian Villains Saga. Four villainous men, cursed by their fathers, follow their legacy of greed, murder, lust and pride. Set in 1867 England, the saga is written in the classic gothic romance tradition of Victoria Holt and Phyllis A. Whitney. Originally published as a novella trilogy (“Hidden in the Shadows” “Whispers in the Fog” “Revealed in the Mist”) Mark of Caine contains scenes, language and themes written for a mature audience.

Available in Kindle Unlimited and in Print
Posted by Writewood Creations at 12:19 No comments: