Will the real Catherine Lloyd please stand up...

By sheer fluke (and prior to the awesomeness that is Google for research) "Catherine Lloyd" chose her pen name to write romances by amalgamating the first names of her two favorite people, never realizing the name was already taken. But as the style, voice and subject matter of the two authors are completely different, it seemed unlikely there would be any confusion.

Until poor Windemere Hall was released. A reader was disappointed to find it was not at all the book she was expecting from Catherine Lloyd, mystery author. If we wanted a traditional British mystery and we got a brooding, dark anti-hero romance, we would be irked too.

(However, we quibble with the reviewer's comment that the heroine, Clara, is a dimwit. Given the status and power of women in the Victorian Age, her choices are not gloriously abundant. She makes the best one she can in her circumstance. How this terrible choice changes her and develops her strengths is the theme of the story. How the villain, Branson, matures into a man she admires is the heart of the story. But we digress...)

The reviews of the trilogy installments (Betrothed, Betrayed, Beguiled) indicate the story is not at fault, only confusion in authorship. Catherine Lloyd regrets the trouble her pen name has caused. For romance readers who crave a darker, suspenseful historical romance (and can comprehend that women were not emancipated from fathers or husbands in 1867) Windemere Hall  will (we hope!) satisfy that craving.

Borrow it through Kindle Unlimited until October 30, 2016

Print Edition is available through CreateSpace Book Store, Amazon, Barnes and Noble and other independent sellers. 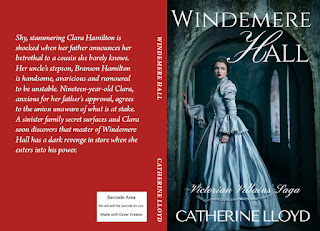 Posted by Writewood Creations at 08:14