BEGUILED wraps up the twisted, tormented love story of Branson Hamilton and his cousin, Clara. Branson's villainy comes back to bite him when he discovers too late that he needs Clara more than his revenge.

Buy it for 0.99 or Borrow through Kindle Unlimited! 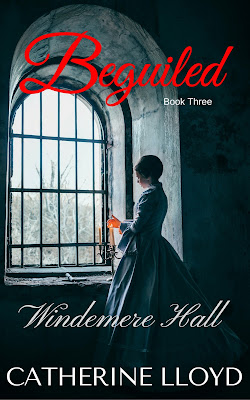 Their story is woven seamlessly into the sequel, Mark of Caine Trilogy which will be launched in June.

Laura Mayhew is the only witness to a sex scandal at Windsor Castle and is swiftly dispatched to Gateshead Insane Asylum. But the girl won’t stop babbling about a stolen baby and the Princess Louise. Her mad tale is beginning to attract attention so Queen Victoria summons Tanner Caine to deal with the problem. The brilliant, solitary and emotionally damaged ex-naval officer is tasked with silencing the girl but first he must break her out of the asylum and win her trust. Laura Mayhew has been expecting the queen to send a man like Tanner Caine for some time and she knows his true purpose in liberating her. But Laura has her own agenda for the ruthless Mr. Caine—if she can just stay alive long enough to see it through.

Posted by Writewood Creations at 08:26