Whew! The newest release in Catherine Lloyd's My Guilty Pleasure Series had us *ahem* chasing down our husbands.... 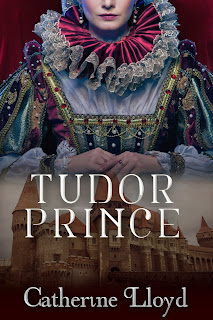 For Sale on Amazon (2.99) or Read it in Kindle Unlimited

Avery Weller is a player who flouts the law that forbids women on the stage. Her nemesis is Lord Nicholas Blackstone, Master of the Revels, a soulless bureaucrat who wields royal power over London’s theaters and has been hunting her for months. His pursuit is driving her into the poorhouse, until one day the handsome lord makes her an astonishing offer: fifteen pounds in exchange for becoming his brother’s companion.

Nicholas Blackstone has a stunning secret living in his attic at Blackstone Hall. His adopted brother, Sir James, is the last Tudor prince, grandson of Henry VIII and heir to Queen Elizabeth’s throne. A royal lineage so explosive, that Blackstone has been keeping James from society, waiting for the moment to announce his claim. But as his twenty-first birthday approaches, James is becoming restless. Driven by ambition, Nicholas takes an extreme step to bind the Tudor prince to him—offering up the girl he has secretly admired for months—Avery Weller.

FUN FACTS: A pound in the Elizabethan era was worth approximately four hundred dollars in today’s currency, and punishments for relatively minor crimes in Elizabethan England were horrendous and impossible to exaggerate!

Posted by Writewood Creations at 07:06